In the discourse for a new national art post-colonial upon Indonesia’s independence, or since the time of PERSAGI (Persatuan Ahli-Ahli Gambar Indonesia), we look into the works by 2 artists Gregorius Sidharta and Edi Sunaryo as they uncover their visual idioms at the pinnacle of Indonesia’s modernism.

– The 15 sculptures presented here were acquired directly from artist since 1970s over a period of 3 decades. Likewise, the 8 paintings by Edi Sunaryo were previously in the prestigious collection of Alex Papadimitriou estate.

Indonesian modern art and artists had always undertaken the responsibility to stand by their  tradition. While transiting from the Old Order to New Order, the spirit to strengthen local culture and maintaining national personality had long being the utmost aim of every Indonesian artists.

From an early stage, Gregorius Sidharta (1932 – 2006) practised cubistic expressions in his paintings, and led the trend towards abstract art while studying in Yogyakarta, Akademi Seni Rupa Indonesia (ASRI) in the 1950s. He was later awarded in 1953 to study at the Jan van Eyck Academie, The Netherlands for 3 years by the mission of the Catholic Church. Known to be the pioneer of modern sculptures, Sidharta’s works attest to his ethnic traditions that is so peculiar to Indonesia.

In the 1970s, after taking up a teaching post in Institut Teknologi Bandung (ITB), offered by his friend But Muchtar, he delved deeper into his experimentation for graphical technique drawn upon traditional motifs surrounding him. Though faced with backlash from the Bandung formalists, Sidharta stayed true to his art pursuit for art sake. Just like the political pressure he had endured earlier on in the late 1950s – early 60s upon his return from The Netherlands, unjustly labelled as “westerned influenced” by Lembaga Kebudajaan Rakjat (LEKRA) while teaching in ASRI. Consequently, he was expelled from ASRI and impelled him to move to Bandung; we can see from his oeuvre that despite political turmoil, Sidharta remains faithful to his art practice. G. Sidharta working on the sculpture Salib (The Cross), 1959

G. Sidharta together with A. D. Pirous, Fadjar Sidik, and Ahmad Sadali were forerunners in the Abstract Modernist Art movement in Indonesia. 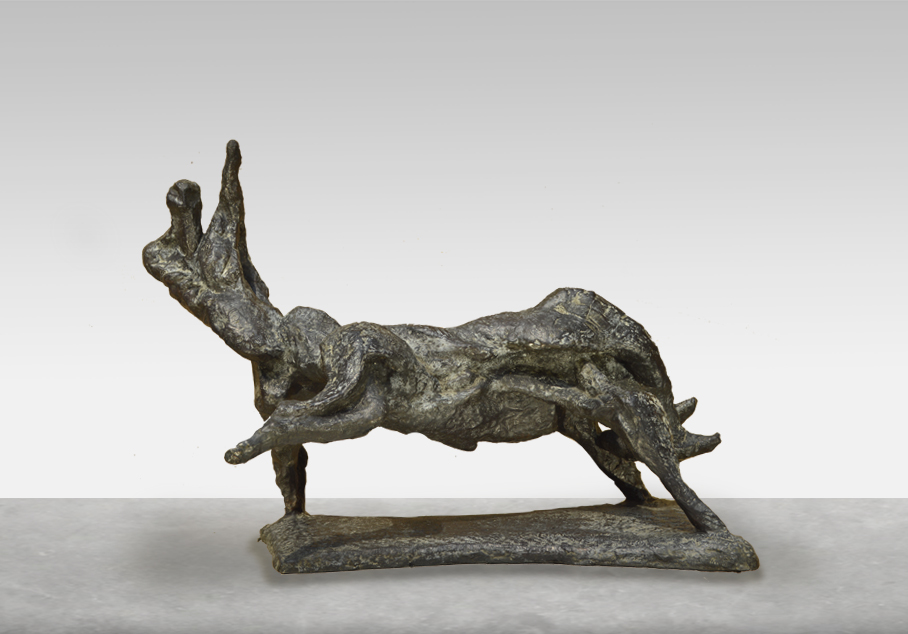 Published in 1996 in the book Modernisme Asia, Manusia Banteng (Bull Human) was selected to illustrate the development of modern art in Indonesia. This is unimaginable 5 decades ago, for in the 1960s Sidharta was isolated from the mainstream LEKRA artists, due his inclination for modern abstraction. 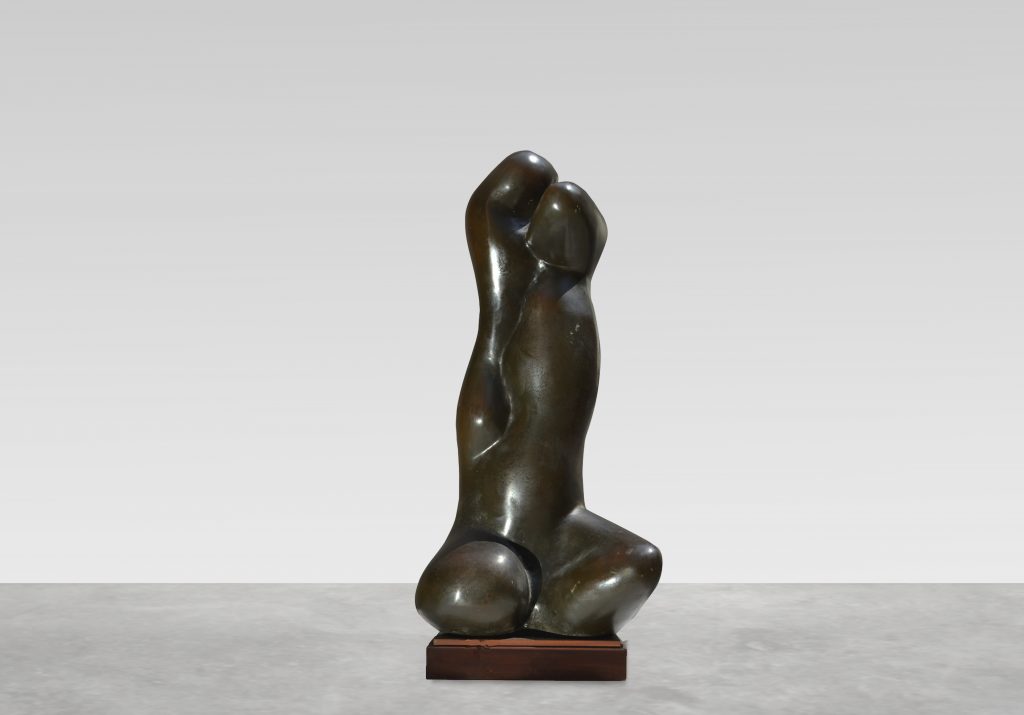 According to Sidharta, from conceptualizing to brainstorming and finally drawn on sketches, it is always a tug-of-war when making sculptures, a negotiating process with the tools, materials, techniques, and the ability of the artist’s hands.

The work titled Wanita Duduk (Seated Lady), is an almost deformed shape of a woman figure, yet, in its roundness and organic shape of various angles, reveals the wavy curves of a bathing woman.

Completed in 1967 after his moved to Bandung, Sidharta oriented towards expressing basic forms and aesthetic values, the constructive geometric were unlimiting. This sculpture presents in rawness the tender and beauty of a woman figure.

Sidharta’s move to Bandung was initially a good fit met with like-minded Modernist Bandung artists in ITB. However, it was not long after that he felt restless to the repetitious approach towards modernism. Shortly, he make a bid for localizing modern expression using graphic techniques. 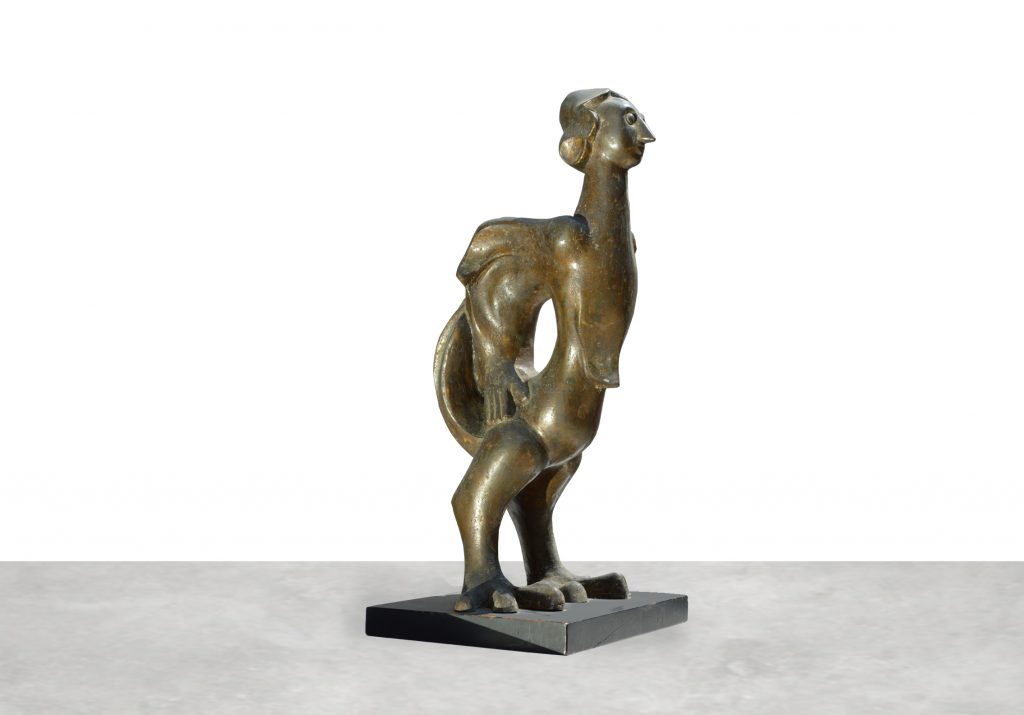 Sidharta turned to traditional motifs for new inspirations. During this period (1970 – 1984), he adopted motifs seen in traditional rites, batiks, dance performances and houses for his visual elements. Incited by those patterns and marks, his sculptures became more primitive and decorative styled.

His resolute stance against staunch Bandung Formalists had torn open a rift, thereafter, Sidharta bust a gut to break all forms of formative art principles. An absolutely stunning sculpture, Ibu dan Anak (Mother and Child) illustrates a moment when a mother is nursing her baby child, highlighting her as a loving mother with strong motherly ties. With her hair being tied in a bun, the mother holds her baby with love and great care, giving her truest affection. This sculpture effortlessly showcases a heart-warming feeling of a mother-child relationship. 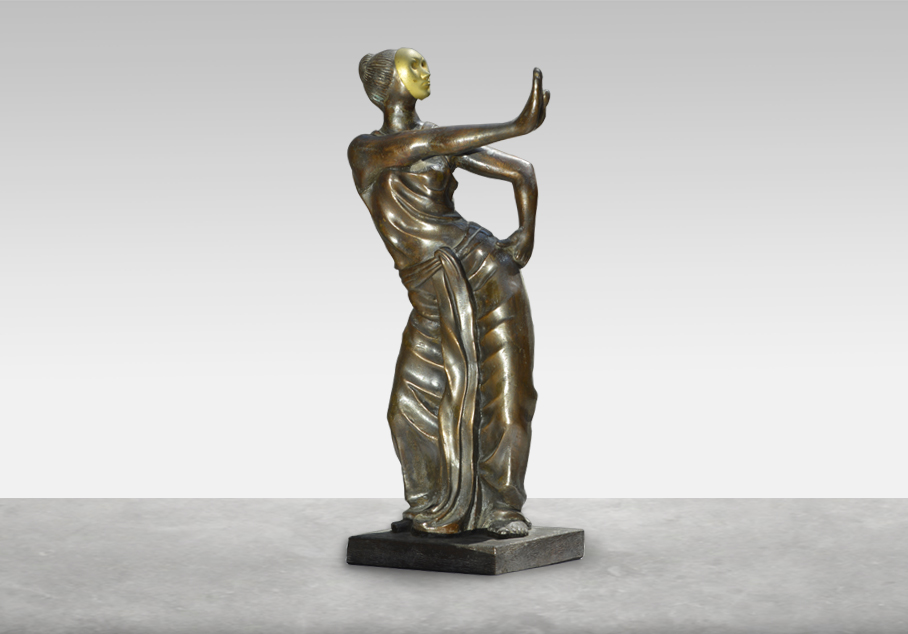 Ever since, Sidharta confronted the dialectical clash of Javanese mystical culture with the soul of modern times. The two are not poles of opposite ends, instead, together they manifest the strive for a true Indonesian national identity. 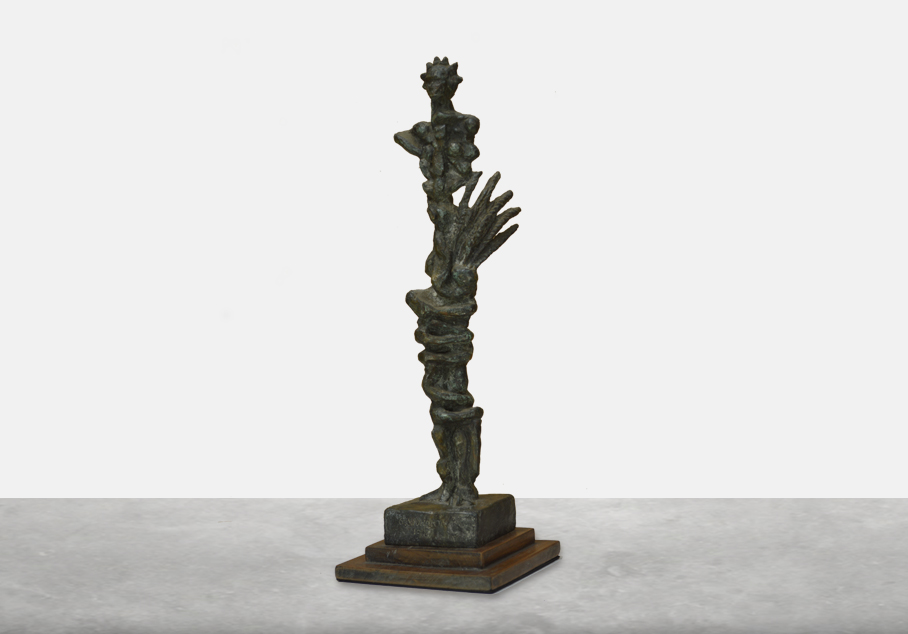 “Modernism still leaves me with a sense of colour, texture, mass, and lines” – G. Sidharta 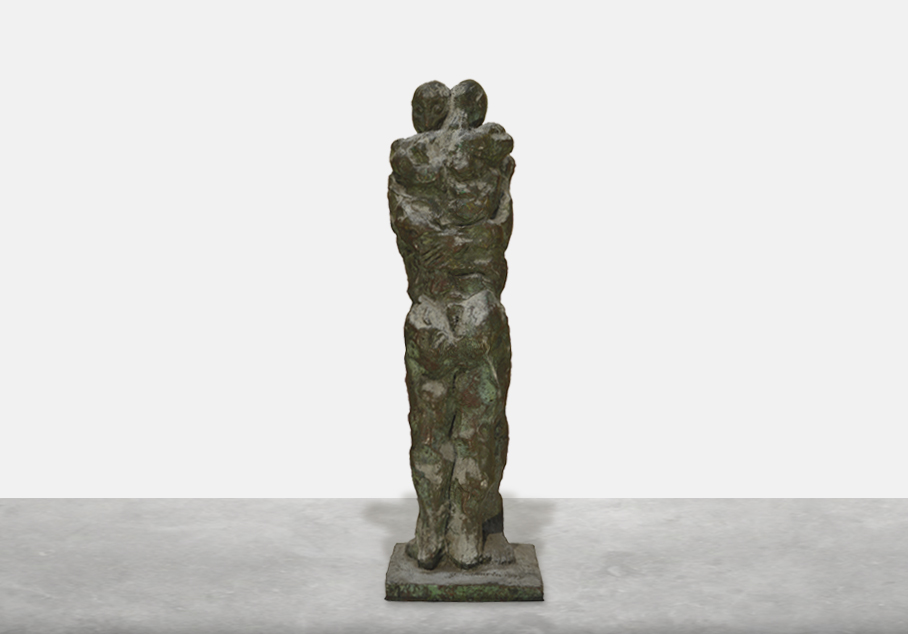 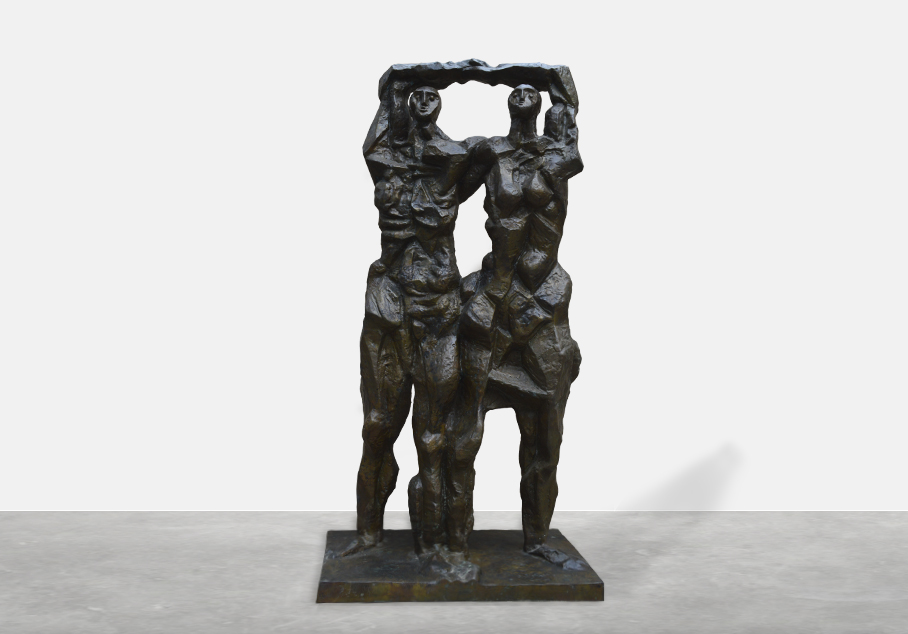 Pembangunan Hari Depan (Development of Future) shows Sidharta’s idea to manifest the universal idea of forms that signifies life. The presentation of form is achieves by a figurative abstract approach of two connecting bodies that are united. This idea of unification can be physical or spiritual; like yin-yang or in Javanese culture lingga-yoni. The two figures standing in solidity, forms a composition of reflecting each other asymmetrically, albeit with balance, it eludes unification, harmoniously achieving equilibrium.

Edi Sunaryo (b. 1951) was primarily influenced by the emergence of abstract expressionism in the 1970s. After failing to enter the Indonesian Military Academy, it seems to be fate that he eventually enter the STSRI Yogjakarta (now known as ASRI)  in the department of fine arts in 1972. Edi gained expertise in graphic arts during his college life.

Edi’s abstraction is not merely an arbitrary work of lines and forms doodles onto the canvas, these basic elements of patterns, fields, colors, and texture when viewed in context is an expression of spontaneity and automatism. In short, it is an expression of freedom, liberating from any political interests of that era. Symbolically, like an independent nation coming out of cold war and decades of colonial ruling, there are limitless boundaries waiting to be scouted by the young generation.

This exhibition we bring forth to you 8 works by Edi Sunaryo that was in the most eclectic collection of Alex Papadimitriou. From this series, we can imagine each painting handpicked from the artist’s studio by one of the greatest art collector of Indonesia modern history.

Apart from artists who were active in Jogjakarta in the 1970s like Affandi and Nyoman Gunarsa, who expound  the dynamics of art from the people, Edi adopted schematic creativity.

Synthesizing the use of geometric shapes and tropical colours of Indonesia, Edi’s abstraction at first glance is primeval. The irregular forms look like mark-making and traditional motifs broken into its simplest configuration.

Through the structure of the planes, space, and colours, Edi developed the symbolic abstraction of cosmic within his paintings. The ornamental symbols derives from visual cues such as nature and intuitions.

The coarse texture are superimposed with geometric forms and movements of the space on canvas. The voids on canvas left consciously, play with the idea of unseen negative space, further accentuates primitive semantic painting style. In his works, Edi tends not to carve with details, much less smooth the finish. Instead, he responds to the existing fluidity of the oil paint on canvas and explores the possibilities of shapes and gestures.

Send us your inquiry for Sejoli!

Send us your inquiry for The Champion!

Send us your inquiry for Ibu dan Anak! 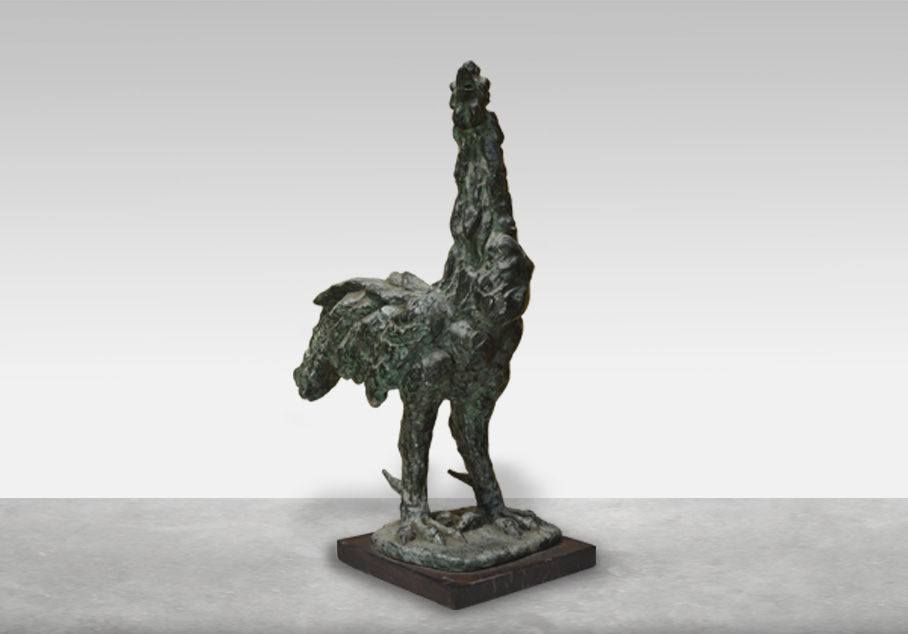 Send us your inquiry for Ayam Jantan 4/5! 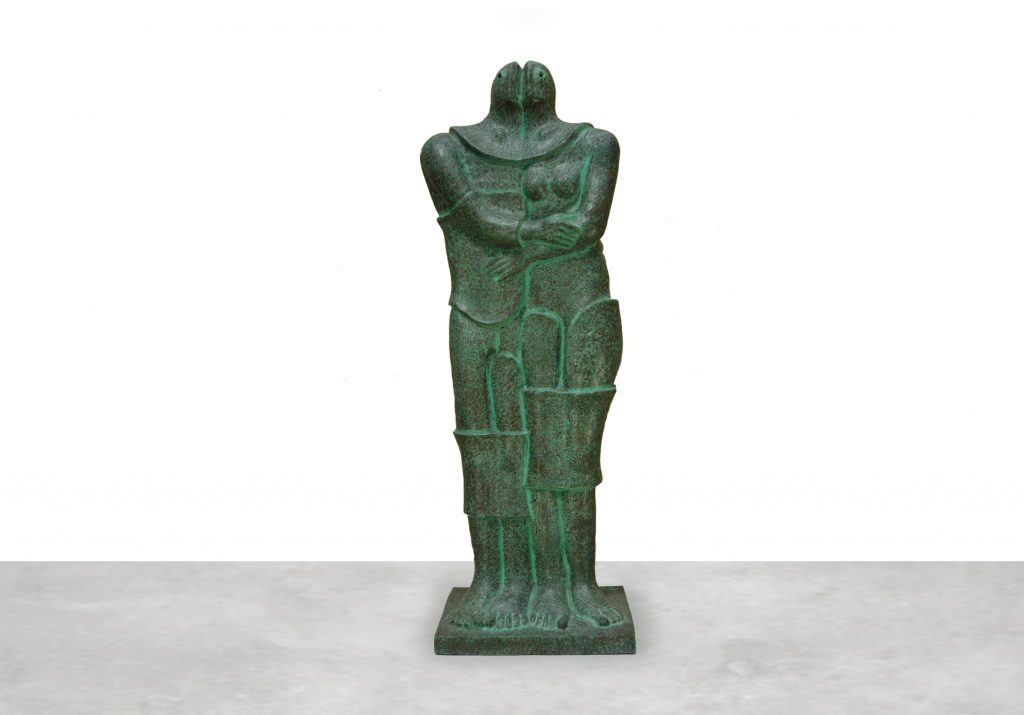 Send us your inquiry for Sejoli!

Send us your inquiry for Penjual Bunga!

Send us your inquiry for The Little Brave!

Send us your inquiry for Penari Topeng!

Send us your inquiry for Ayam Jantan 3/5!

Send us your inquiry for Hugging! 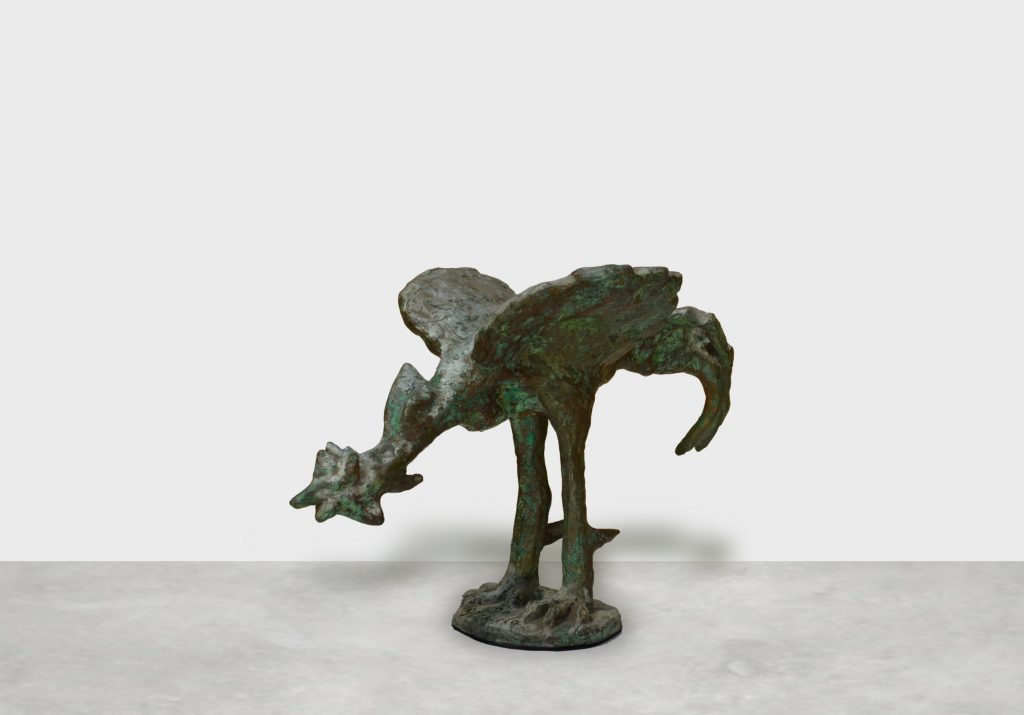 Send us your inquiry for Ayam Jantan (Rooster)! 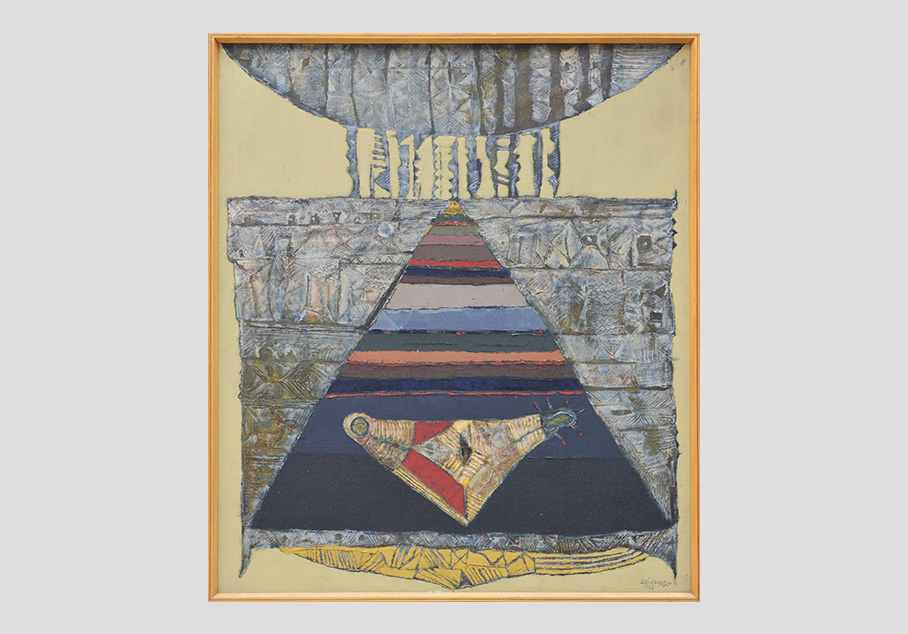 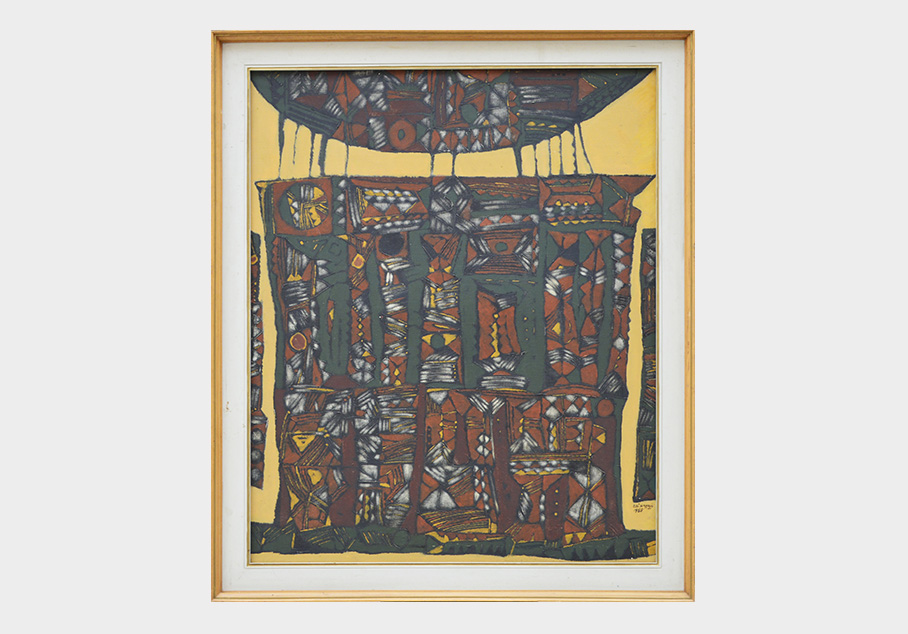 Send us your inquiry for Ragam Keindahan! 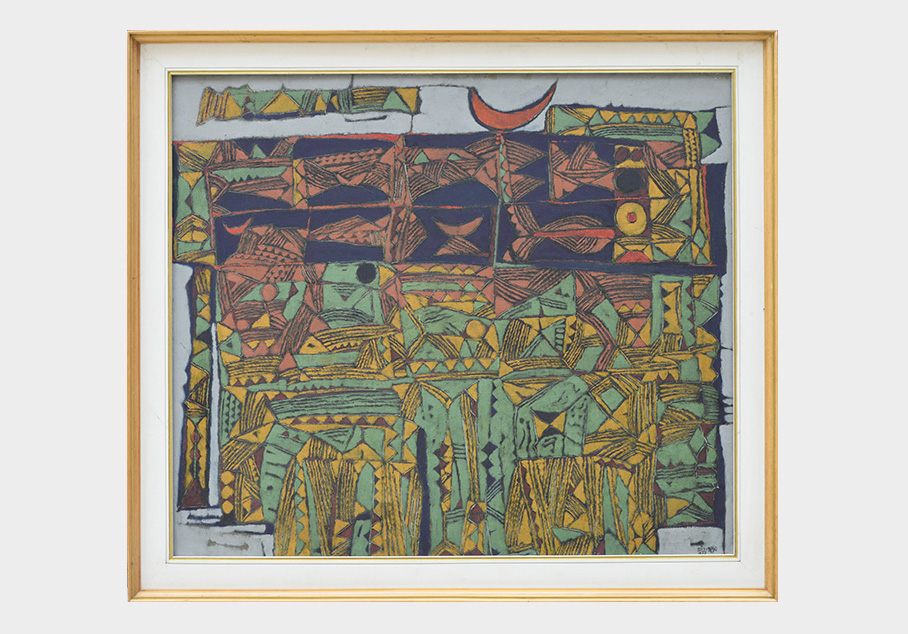 Send us your inquiry for Keramaian Kota! Send us your inquiry for Rimbun! Send us your inquiry for Keragaman! Send us your inquiry for Persona Abstract! 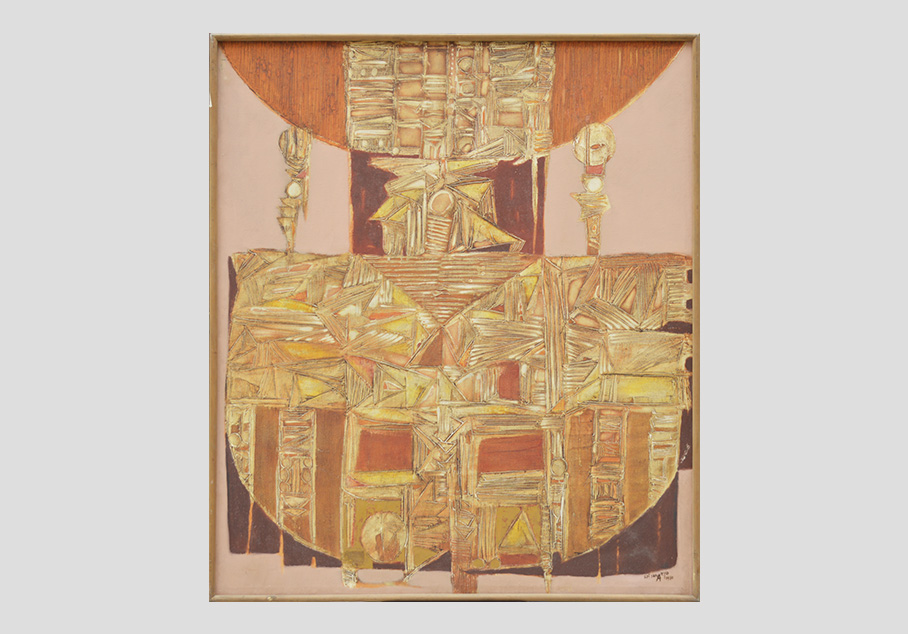 Send us your inquiry for Ritme!

Private viewing of the physical works available in Jakarta. Please contact us to book appointment.

We use cookies to personalise content and ads, to provide social media features and to analyse our traffic. We also share information about your use of our site with our social media, advertising and analytics partners. By continuing to use our Site, you consent to our use of cookies. 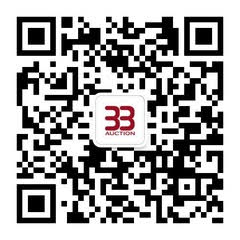